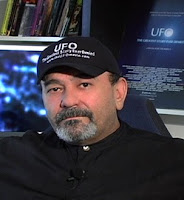 Producer-Director, Jose Escamilla has been editing film and video for over 30 years. Jose's UFO experiences which occurred at Midway, New Mexico on March 5, 1994, has put him on a variety of lectures and television\radio programs talking about the subject.

It was then he videotaped sixteen minutes of UFO footage in broad daylight nine miles south of Roswell, New Mexico. He thought this would be the only UFO encounter he and his family would ever have.

But fourteen days later he recorded something on videotape that would forever change his life. A new phenomena called RODS captured the public attention.

Since then Jose has produced several award winning UFO documentaries. His new movie, The Battle of Los Angeles is in production now. Jose has lectured on many UFO subjects and continues a heavy production schedule through this year. He is currently working on sequels to his work and a new Ghost documentary. Jose created TBLN Films, an all paranormal network online.

Show Notes: Be sure to watch the entire program for scenes from The Battle Of Los Angeles. Scenes, test shots and a new trailer exclusively on Conundrums! In this episode Jose talks about his many documentaries, his UFO experiences, Ghost experiences and growing up in Roswell.
Jose's titles include RODS, Moon Rising, LUNA, UFO: The Greatest Story Ever Denied, Interstellar and more.

Audio Only Version for when you are on the go! Click Here.

~
About Conundrums: Conundrums is a weekly talk/interview show featuring prominent people in the paranormal field. Topics include UFOS, Ghosts, Cryptozoology, Ancient Astronauts, and all aspects of the study. Conundrums is recorded on Wednesday night and 'airs' on or before the weekend. The program is available to watch on a multitude of distribution platforms. Subscribe, bookmark and watch Conundrums each week!