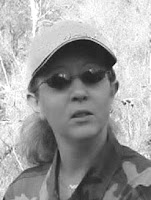 EP# 39: Melissa Hovey; Bigfoot Photo
Melissa Hovey came forward this week with a photo purported to be that of an actual Bigfoot. The photo was sent to her four years ago and she has debated whether it is authentic or not. In an effort to entice the person who took the photo to come forward and give her more information she has released the image.

In this episode Melissa discusses the photo, her reasons for releasing it, and the information she has so far on how this photo came to her attention.
Melissa has appeared on MonsterQuest and maintains a blog titled, Search For Bigfoot.

Show Notes: You can also catch this episode on YouTube and Blip TV.

Please follow us on Facebook & Twitter.
~
If you have a Book, DVD or Personal Encounter and would like to be a guest on Conundrums, read our "Be Our Guest" page and contact us!
We are looking for interesting people in the paranormal field. You only need a web camera, microphone, Skype and high bandwidth internet connection such as DSL or cable to be interviewed. Jay Michael records the program on Thursday evenings at 8pm cst.
Programs are made available on the internet and several mobile and internet TV outlets to view. We are also in the Educational section of the Sumini Channel on Roku! Plus Blip.tv & Itunes!
Get the word out about your Paranormal, UFO or Criptid experience!
About Conundrums: Conundrums is a weekly talk/interview show featuring prominent people in the paranormal field. Topics include UFOS, Ghosts, Cryptozoology, Ancient Astronauts, and all aspects of the study. Conundrums is recorded on Thursday night and 'airs' on or before the weekend. The program is available to watch on a multitude of distribution platforms. Subscribe, bookmark and watch Conundrums each week!
Posted by Jay Michael, Producer: at Friday, February 24, 2012