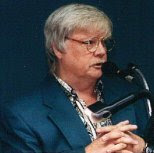 EP#20: Ted Phillips; UFO Landings; Marley Woods; Trace Cases
Ted R. Phillips is the Director of the Center for Physical Trace Research. He began investigating UFO reports in 1964 and was a research associate of Dr. J. Allen Hynek from 1968 until Dr. Hynek's death in 1986. It was at Allen Hynek's suggestion that he began specializing in physical traces associated with UFO sightings in 1968.
Ted has personally investigated some 600 UFO cases. He is currently investigating the "Marley Woods" case.

Ted was a member of a select team invited to meet with the United Nations Secretary-General at the UN in New York, along with Hynek, Jacques Vallee and Gordon Cooper. He gave two presentations at the First International UFO Congress and a presentation at the first MUFON symposium. Most recently he was a part of the History Channel documentary UFO Hunters and Alien Encounters.

~
About Conundrums: Conundrums is a weekly talk/interview show featuring prominent people in the paranormal field. Topics include UFOS, Ghosts, Cryptozoology, Ancient Astronauts, and all aspects of the study. Conundrums is recorded on Wednesday night and 'airs' on or before the weekend. The program is available to watch on a multitude of distribution platforms. Subscribe, bookmark and watch Conundrums each week!