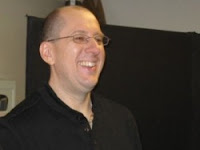 Eric Altman's interest in Bigfoot began at the age of 10. He spent most of his childhood reading books on Bigfoot, the paranormal and the unexplained. At the age of 14, Eric met Stan Gordon who would inspire him to become a Bigfoot field researcher.

He began active field research in 1997. In April 1999, Eric became a member of the Pennsylvania Bigfoot Society. By January 2000, he was asked to become the Director of the PBS which he has held since.
Eric has over 29 years combined in researching and investigation the Bigfoot Phenomenon and field investigations. Eric also serves as the chairperson for the East Coast Bigfoot Conference.

As well as Bigfoot, Eric also investigates UFOs and other mysteries.

About Conundrums: Conundrums is a weekly talk/interview show featuring prominent people in the paranormal field. Topics include UFOS, Ghosts, Cryptozoology, Ancient Astronauts, and all aspects of the study. Conundrums is recorded on Monday night and 'airs' on or before Thursday evening. The program is available to watch on a multitude of distribution platforms. Subscribe, bookmark and watch Conundrums each week!